The words ‘Southern Pointe’ may mean nothing to most of us, but to a select group of veteran race enthusiasts, this seemingly innocuous phrase probably evokes feelings of extreme nostalgia and fond memories, mixed perhaps with a degree of sadness and heartache.  The reason is, for those of you who don’t know, is that ‘Southern Pointe’ is the name of the new housing development being built on the site of the iconic Texas World Speedway.  And to those newcomers to Central Texas scratching their heads in bewilderment right now, the Texas World Speedway (originally called Texas International Speedway) was once the premier track and racing venue in Central Texas…decades before Circuit of the Americas ever existed!

Sadly, the Texas World Speedway is now in the distant past, a fading memory to race fans as much as the iconic Armadillo World Headquarters is to many aging native Austinites.  By the time that legendary music venue on the shores of Town Lake succumbed to the wrecking ball in 1980, the Texas World Speedway, situated on 600 acres just outside College Station, was already beginning to lose its luster.  When it was first built it was promoted as one of the new super-speedways to match the speed and thrill of other high-banked ovals such as Talladega and Daytona.  The two mile, D-shaped oval with breakout road course held its inaugural race in December 1969 with the Texas 500, a NASCAR Grand National event in which Bobby Isaac took the trophy and $15,000 purse, reaching speeds in his Dodge Charger in excess of 176 MPH.  The track was built nearly identical to, and at the same time as, Michigan International but TWS boasted a full 22° bank in the turns, 4° more than MIS, allowing for faster track times.  The exuberance and expectations for the track were high in the increasingly popular NASCAR series as Bill France and family took the sport from a local Southern staple to national recognition.  But the track proved to be far more versatile than that.  USAC (the predecessor to the Indy Car Series) quickly took notice and sanctioned their first race in October 1973 with qualifying speeds well in excess of 200 MPH.  Al Unser took the checkered after a controversial restart three laps from the finish but managed to hold off Gary Bettenhausen for the $17,000 take-home purse.

It was an exciting time for racing in Texas back then, but the newly built venue was far from perfect.  Financial problems plagued the track almost from the start with NASCAR quickly complaining that the purse was too small.  This was a direct result of the low attendance figures compared to other super speedways. When it was first built, it was hoped that the central location of the Texas World Speedway would be a draw for enthusiasts from Houston and Dallas but it proved to be just too difficult to get to for most race fans.  College Station at the time was about the size that Taylor is today and Austin boasted no more than 250,000 inhabitants at the time.  With poor access to the track (off of the narrow two-lane Highway 6) and an unpaved infield which turned into a muddy morass for overnight campers, attendance at races rarely exceeded 20,000 – a third the number of other racetracks at the time.  The founder and developer of the track, Larry Lopatin was quickly forced out by his investors as the well-known adage of ‘build it and they will come’, proved not to hold true for him in Texas.  Over the next decade, lacking a firm commitment from NASCAR to support the track, a mixture of other circuit races were added from a veritable alphabet soup of organizations – USAC, SCCA, ARCA, IMSA.  It even hosted a Willie Nelson Fourth of July picnic in 1974, in a desperate attempt to stay afloat.

But in spite of its ‘checkered’ past (pun intended), the Texas World Speedway was a brilliant pearl for the local racing scene in Central Texas.  There was nothing like it within 200 miles, built to accommodate both a high-banked superspeedway as well as a 15-turn road course, it became a favorite venue for local car clubs to hold autocross, driving schools, and club races as well as a private test track for established teams.  The all-time track record was set in 1993 when Jeff Andretti, in preparation for the upcoming Indy 500, pushed his Buick-powered Lola to 234.5 MPH.  But with the exception of a few IMSA races in the mid-1990’s, club racing became the main attraction for TWS with Porsche Club of America actively utilizing the track well before the founding of the Hill Country chapter in 1977.  The track remained a staple venue for all four regional chapters of PCA up through 2011.  Sanctioned races had all but disappeared due to the deteriorating maintenance conditions and Hill Country PCA held its last event (a DE session) on October 29, 2011.  The track was in desperate need of repaving and there were rumors that Bill Mather, the current owner, was trying to come up with the million dollars needed to resurface it but as so many other hopes and dreams surrounding the Texas World Speedway, it simply never materialized.

Thereafter the facility continued its slow battle against the elements.  It reached a low point in 2017 when it was ignominiously leased to a group of insurance companies who used it as a dumping ground for all the flooded cars salvaged from Hurricane Harvey.  It is estimated that over 33,000 cars were hauled to TWS over the course of several months and just parked all over the infield, track and parking areas.  One can’t help but wonder that if the number of spectators to TWS events had ever come close to the number of flood cars on site, the story of this iconic track may have turned out differently.  The sight of thousands of rusted and water-logged hulks strewn about the grounds marks a sad and shameful chapter in this once proud Texas racetrack.

But even that was not the end – in spite of ongoing rumors of new financing and possible resurrection of the track (at least the flat road racing section), it was all for naught.  In July of 2018 the bulldozers and road graders arrived and began churning the dirt around the track.  Modern progress had finally arrived to fulfil the ultimate extinction of this mighty dinosaur.  The developer decided it was too expensive to physically tear down the entire track so instead, sections were cut up piece-meal as the new master-planned community evolved.  It is said that the main grandstand had a 20 foot section cut clean through it in order to lay plumbing and sewer lines, leaving rows of bleachers on either side.  Today, owners of the homes in Southern Pointe can still see the track from their backyards.  Most of the new buyers I’m sure are curious about this ‘behemoth’ casting shadows over their lawns, but it is hoped that a few residents my take a different view.  Seeing the high banking and the grandstands from their back porch, while sipping coffee in the early morning sunshine, perhaps a few residents will sense the roar and rumble of past days, the smell of high-octane fuel and scuffed rubber, and give a moment of reverence for this state-of-the-art racetrack, once a shining star in Central Texas. 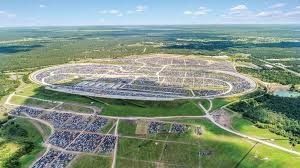