Charlie is a native Austinite, and so is his wife. She grew up in north Austin and Charlie is a south Austin boy. After graduating from UT Austin, Charlie went into Commercial Banking with Bank of America in Austin. They moved away from Austin in 1992, going to Dallas and then Tulsa for new banking positions.

Along the way Charlie also spent 15 years as a leader in Boy Scouts and served on various non-profit boards.

Charlie moved back to central Texas in 2013, and retired in 2017, after 35 years in banking. Charlie and his wife now call Georgetown home. They have been members of PCA for 11 years, and HCRPCA members for the past 5 years since moving back home.

While in Tulsa, Charlie rekindled his interest in Porsche. He had always loved the look of the original 911 Turbo…that huge tail hanging off the rear of the car was just fascinating to him as a teenager. Charlie had owned a few muscle cars in the past, but Porsche held a special interest with him. A friend in Tulsa convinced him to try a 993.

So in 2006 Charlie acquired his first Porsche, a 1995 Carrera Cabriolet. He did a fair amount of restoration on the car over the years, doing some of the interior work himself. Charlie and his wife joined PCA at that time, and were members of the Cimmaron region until they moved back to Texas. Charlie ended up selling the 993 to another HCRPCA Member who lives about 10 minutes away. He still sees that car from time to time.

Along the way, Charlie and his wife have enjoyed several other P-cars, and here’s the list.

Porsches we have owned in the past: 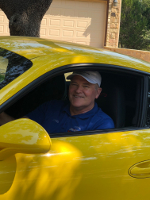